In the early history of the mines a company of Mexicans occupied a prairie-like slope about 1 ½ miles north of the mining town of Kelsey (3 miles above present day Chili Bar). They were joined by some native-born Californians (Californios) and Chilean miners, and, as they all spoke Spanish, the place was known as Spanish Flat. Westward about a mile through dense pines was a similar place, occupied by a small company of American miners, and hence, called the American Flat.

About one hundred Chileans arrived in San Francisco, and coming out to the mines, very naturally came to those who spoke their own tongue; and so, in the latter part of June, 1852, Spanish Flat became quite populous. One Sunday, when the American company, only five or six in number, were away, some persons claiming ownership sold the American mine to some of the newly arrived Chileans, and receiving a price – a considerable sum – left before the fraud was identified. Having bought not only the mine, but the mining implements, the Chileans immediately began work, and when the real owners returned on Monday morning they found that their claim had been “jumped.” Probably a hundred men were in possession and ready to hold it by force of arms; and as they spoke different languages, explanation was impossible.

Messengers were sent to the nearest mining camps, asking the men to bring their rifles and other weapons, and to assemble on the ridge above the Spanish Flat. At that time, June 7, 1852, most of the miners had left the uplands for the rivers; and by three in the afternoon, rifle in hand, the men reached the rendezvous, where only some forty had assembled. A man named Murphy explained the affair as he understood it. He knew nothing of the sale, but stated in effect that probably one hundred or more Chileans on Sunday had taken forcible possession of the claim and tools, and refusing to give them up, threatened to shoot whoever interfered. Of course such a force would soon work out the mine, and he proposed that the miners present drive away the Chileans robbers, shooting them down if necessary, take possession of the sluices before they were cleaned up and the gold panned out, and restore the property to the rightful owners. Fortunately not a shot was fired on either side. The Chileans left the claim and relocated to a claim on the American River several miles upriver from the Coloma Gold discovery spot where they worked a rich deposit until wiped out by a smallpox epidemic several years later. Thus came the name Chili Bar. 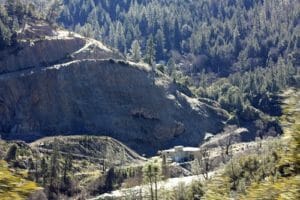 The Chili Bar Slate Quarry is located on the south side of the South Fork of the American River, just east of the Chili Bar Bridge, three and one-half miles north of Placerville, El Dorado County. Even while the gold was being worked, enterprising merchants noted the excellent unique black slate and slate began to be removed from around the Chili Bar mine for use in roofing the new homes in nearby mining towns, in Sacramento and even San Francisco. The actual quarry was first worked from 1887 – 1897 when roofing shingles and other forms of dimension slate were produced by the open-pit method. This included a variety of products including blackboards, school slates, pool tables, roof tiles, flooring, fireplace hearths and other decorative products. The quarry was mostly idle until 1928 when it became an underground operation, producing roofing granules and slate-dust filler, among other products. From 1928 to 1979 Chile Bar slate was ground primarily for granules for composition roofing products. In 1979 a new grinding plant was built on higher ground to enable production during high water periods on the American river! 20 mesh slate product was first developed during this time and was very popular as a key ingredient in the seal coat and asphalt business. Prior to the abandonment of the railroad, the various products were taken to Sacramento by train. Today in addition to material produced to feed the need for ground slate Chili Bar Slate Quarry produces beautiful slate for a variety of home and landscape uses that is shipped all over the Western U.S.